Anemia is a disease caused by the lacking of red blood cells or the presence of less than the average quantity of hemoglobin in the blood. The condition includes reduced oxygen binding of hemoglobin in the blood. The situation is prevalent in India – some studies suggest that Indian women are prone to anemia and even the urban, educated women are susceptible to anemia.

The condition may be severe, long lasting, and life-threatening based upon hemoglobin levels in the blood with specific medical causes and traits, some of these include Iron-deficiency anemia, Folic acid deficiency anemia, Pernicious anemia (vitamin B12 deficiency), Aplastic anemia, Sickle cell anemia, Polycythemia Vera and Trauma-related anemia (mainly injured in a vehicle accident). Nevertheless, it can be traced back to the food habit of Indian society. 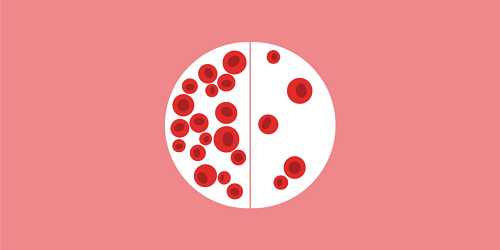 The statistics are shocking. A National Health Survey revealed that more than half the pregnant women in India are anemic. What is worse is that the percentage has increased from the 1990s. The National Family Health Survey dated 2005-06 (released recently) places India at 58.7% of anemic pregnant women as opposed to 49.7% in 1998-99.

When the pattern in married women was studied, the trend was the same, but urban Indian women fared better than their rural counterparts at 50.9% as against 57.4% respectively.

Scientists are doing their bit. Scientists at the Central Salt and Marine Chemicals Research Institute, Bhavnagar in Gujarat have developed double fortified salt, which they believe will be a boon for those suffering from iron deficiency or anemia. But the key to beat anemia is a proper diet.

Some simple dietary steps would help prevent/cure most forms of anemia:

As the typical Indian diet may not be ‘complete’ consult your doctor for supplements and fortified foods. If you have symptoms like feeling dizzy, fatigued, shortness of breath, weakness – it may be anemia. When was your last general health checkup or blood test done? Being aware of anemia is the first step to preventing it.